This is my first pattern from Tessuti, I downloaded the PDF soon after it appeared in April. It is priced at 14 Aus dollars, which is around £7.50.

The pattern is described as ‘a relaxed pull-on top with stylish design features including a wide, gathered neckline’.

This is a lovely pattern to showcase prints. The blue is Nano Iro Fuccra print in tencel, and the sort sleeve version is Atelier Brunette Shade viscose, squeezed from a metre of fabric.

The gathers are formed by elastic. I used 6mm Prym elastic as it is soft and resists folding over.

The facing is attached and the bottom edge folded and sewn in place. After the first version I made a change to simplify and add some definition to the folds

I added light interfacing and overlocked the edges of the facing after joining the shoulder seams.

I also added some embroidery to the back facing to help when putting on! 😺

I have made 4 versions so far. Three with the longer sleeve and one short. I am sure the sleeveless version will appear next summer.

This was the first version, made from Lady McElroy crepe Evening Roost print

There is so a dress version which came out shortly after the top. I may be tempted for summer next year 😺✂️✂️ 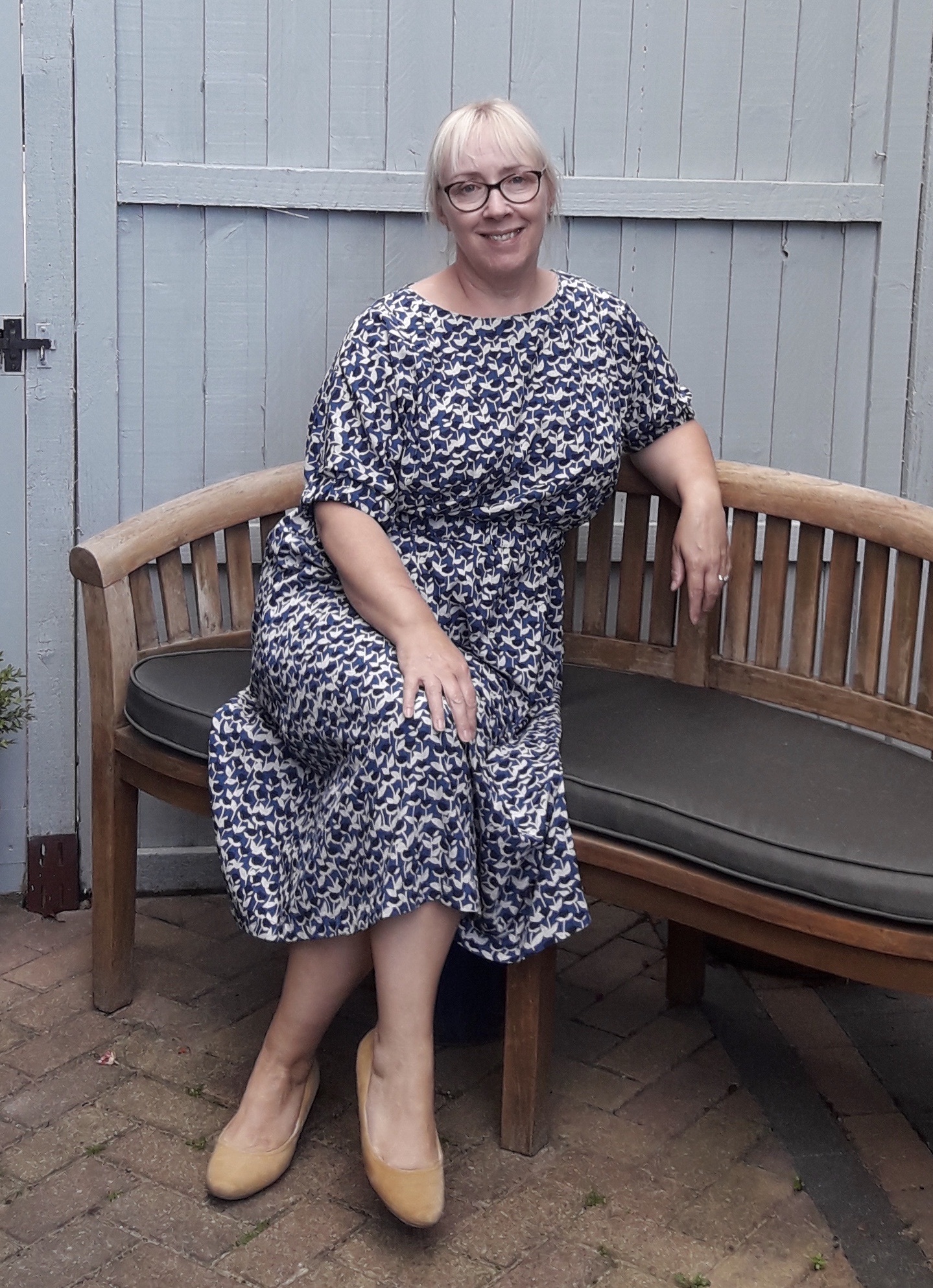 It was inevitable that I would be drawn to the cuff dress, as I have (so far) made 3 cuff tops 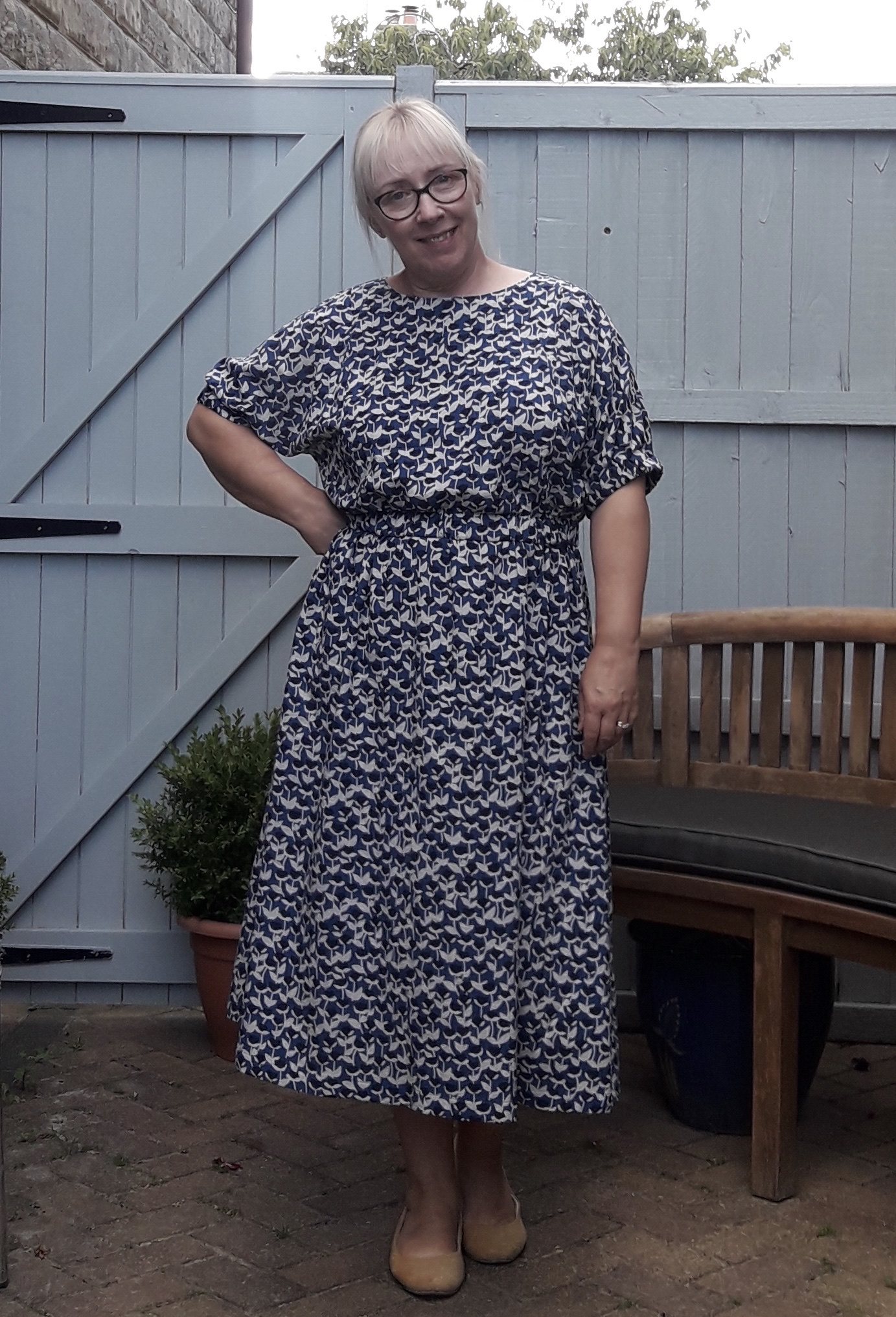 The Assembly Line description of a romantic dress that still keeps all the attitude , based on your love of the Cuff Top’ is spot on

The bodice has a central panel at the front, and a centre back seam with a rouleau loop button closure. This pattern is wide, and there is a lot of useful info on the size to choose on their site, with samples photographed on different size and heights. The pattern is available in 2 size ranges, S-L and XL-3XL. I sized down 1 size and it’s still a loose fit.

The waistband elastic runs through a separate channel

The neck facing extends with the keyhole opening 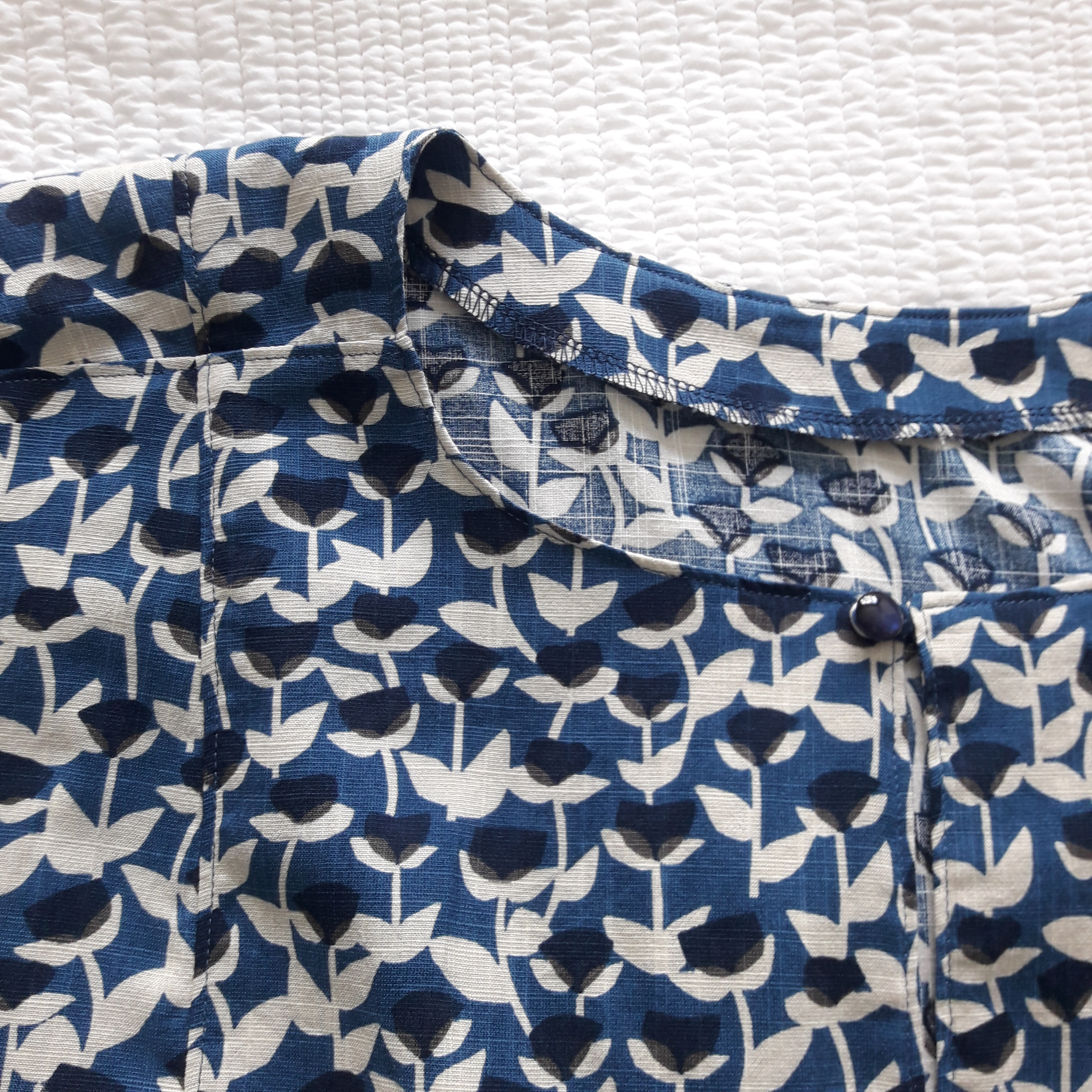 Topstitching holds the seams flat, a feature used in the Top version 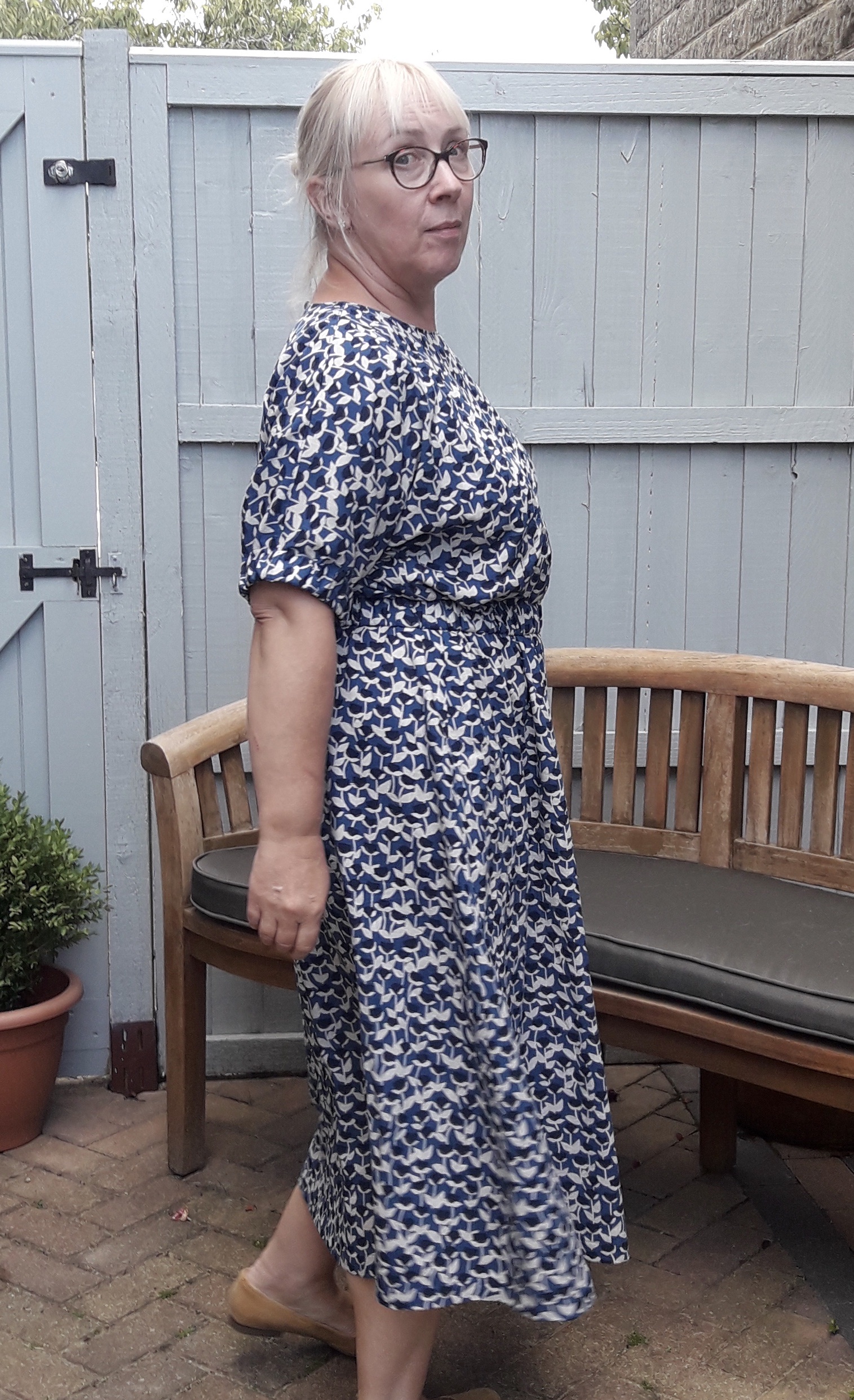 This fabric is a lovely ring spun viscose from Seasalt. I made a medium and had 70cm left from the 3 metre length. I omitted the pockets as the fabric is quite lightweight 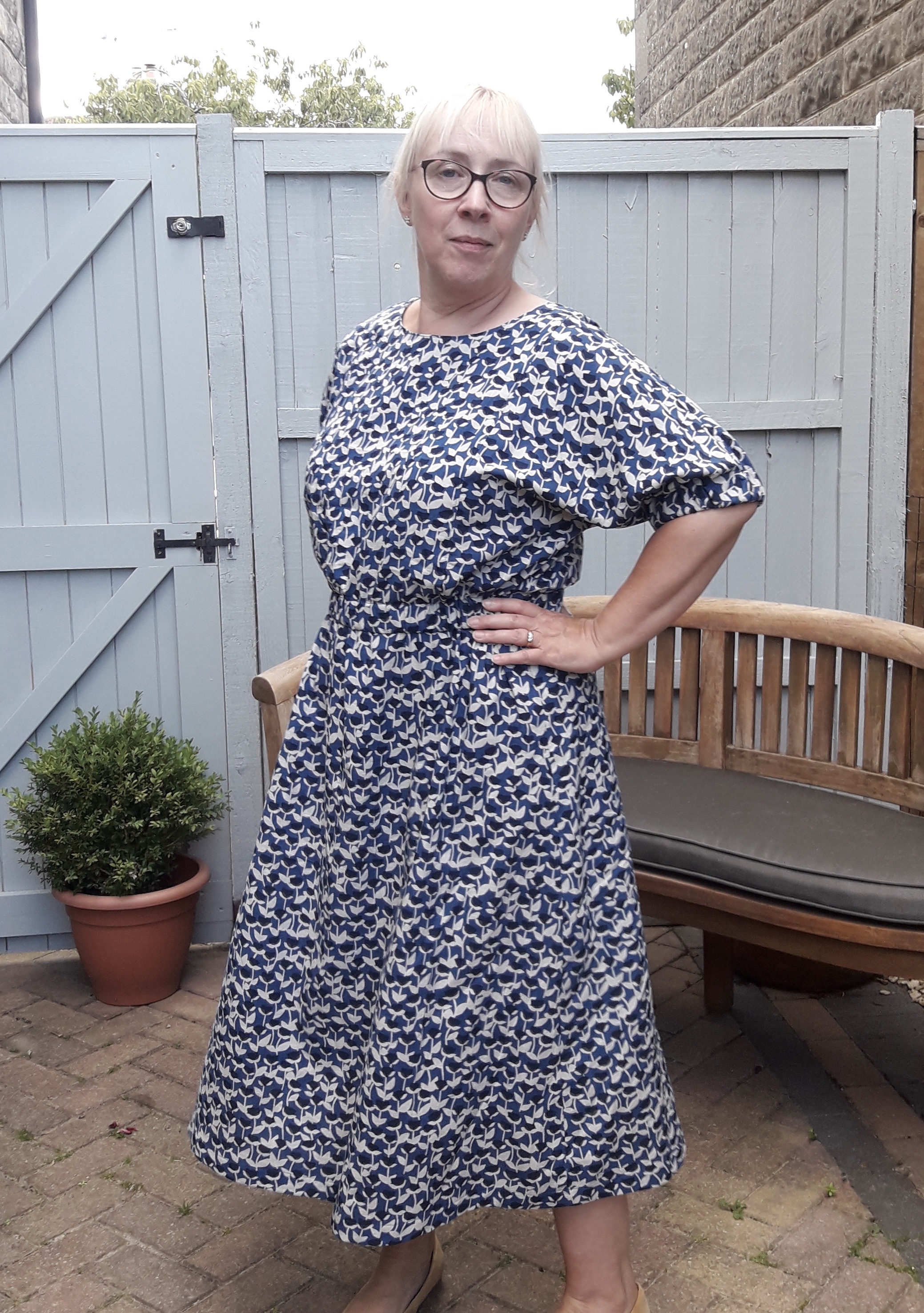 At £19 the pattern is expensive. The instruction booklet is easy to follow and detailed, and the advise about sizing choice is a really useful addition. 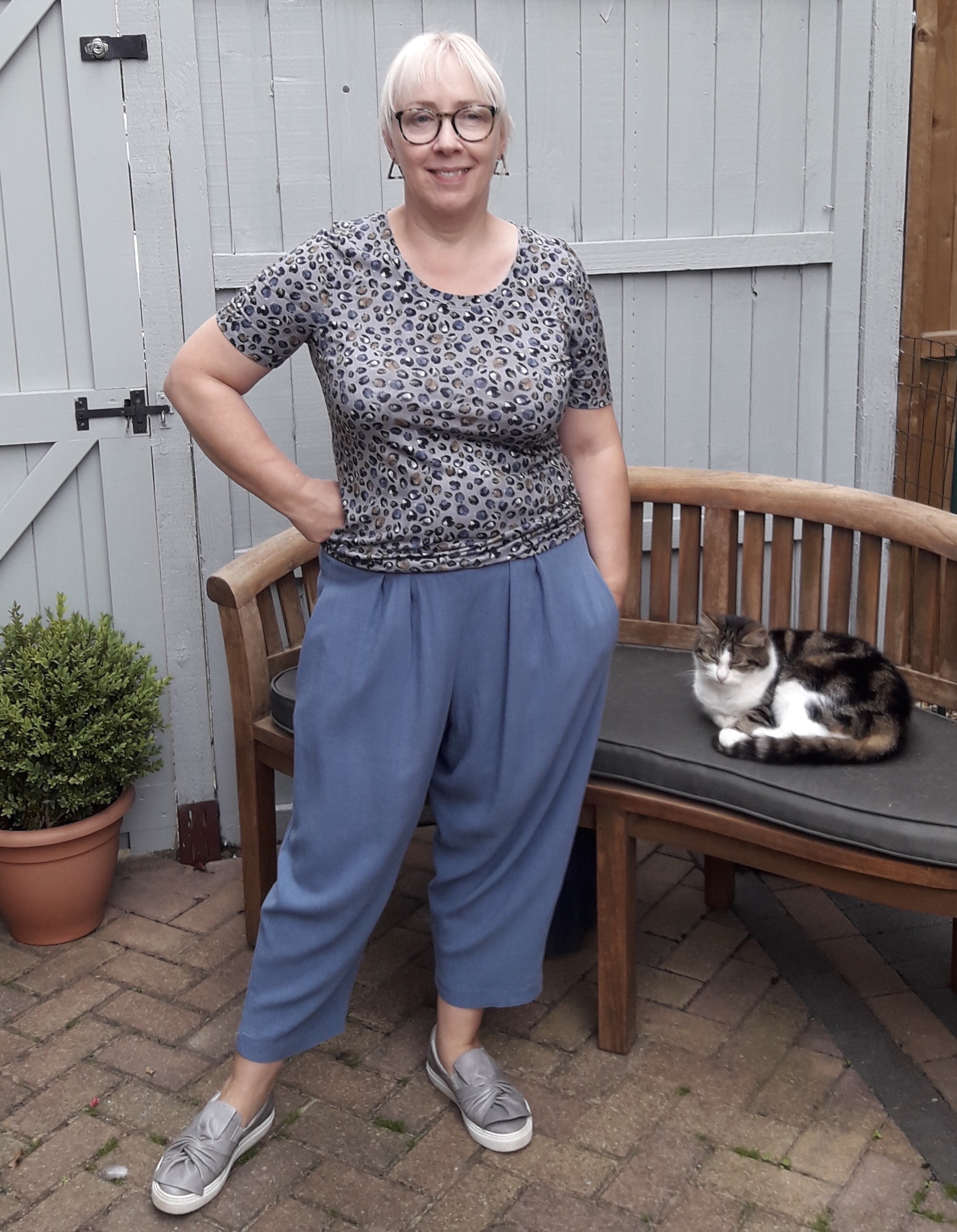 I think it’s safe to say that I love these trousers, as I made two pairs one after the other. 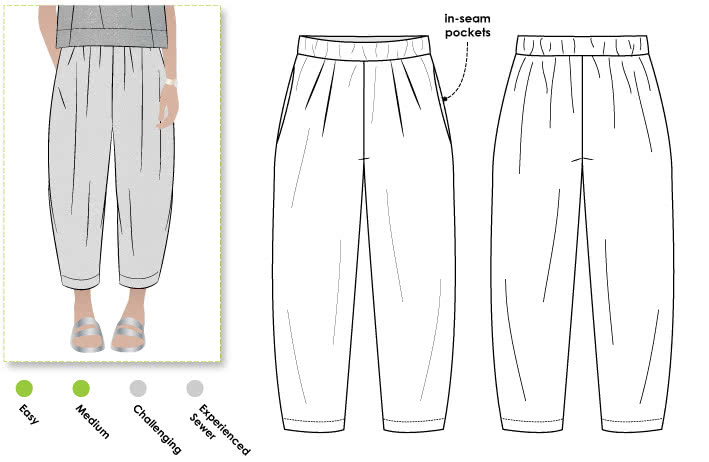 Style Arc describe these as ‘the most comfortable pant you will ever wear! The tucked elastic waist and dropped crotch along with the slight balloon shaped leg gives this designer pant an edgy look. The leg narrows off at the cropped hemline and can be rolled up if preferred’

Loved the idea of comfort! And am a huge fan of cropped trousers, but the crotch really is deep on these. Having read numerous reviews I decided to remove 9cm from this depth. It was super easy to do as there was minimal shaping. I drew a new cutting line 9cm below, lowered the pocket markings and added the pleat notches to the front.

You can see the balloon shape when hung on a hanger.

The crotch is still low, but I think this is a better shape as I don’t like the fit of harem pants.

I made the pockets a bit smaller on the second pair as the fabric is softer and they didn’t hold their shape as well. The pockets sit well as they are held to the seam with understitching. I also raised the pockets an inch on the blue pair. 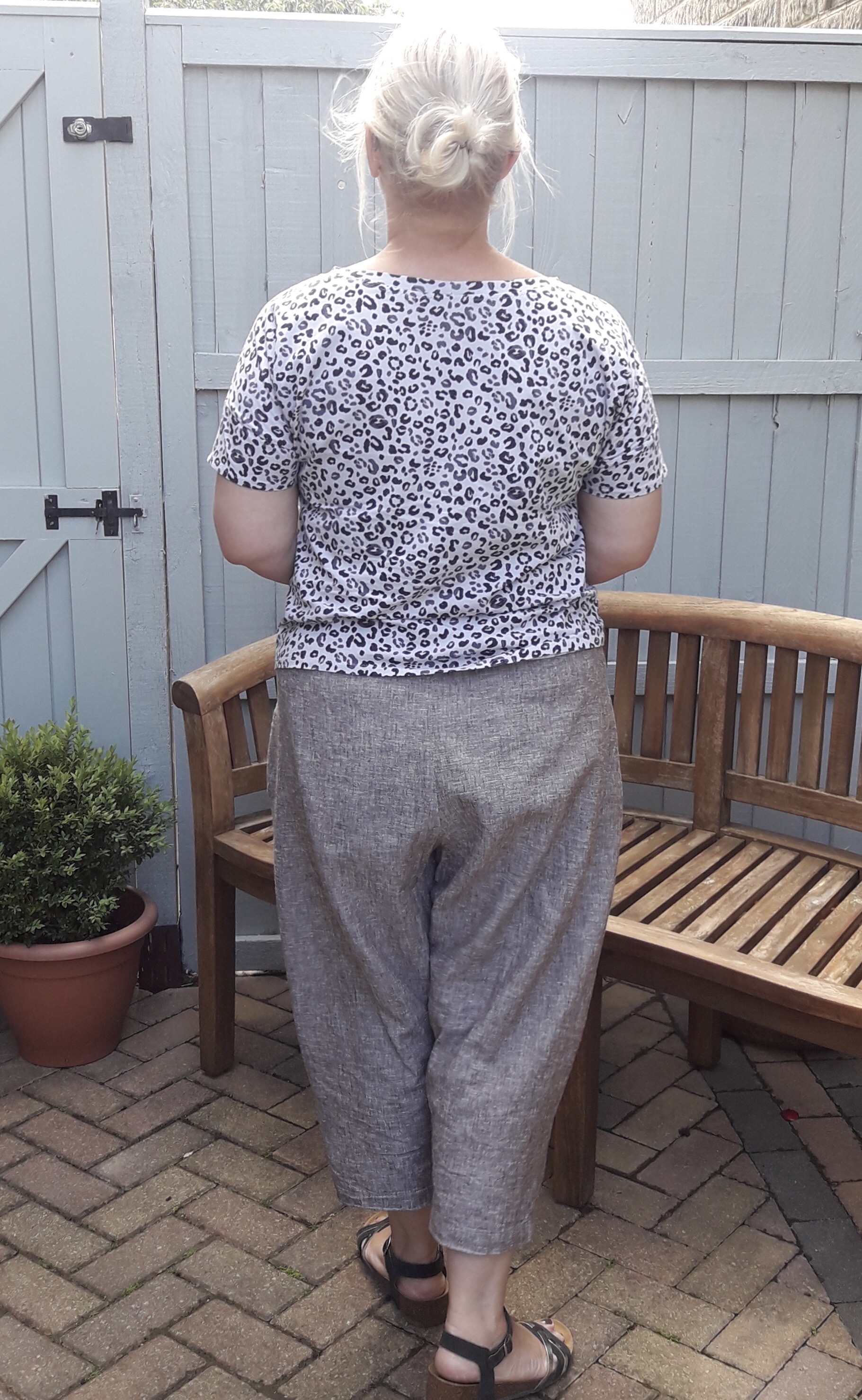 Both pairs are made in viscose linen. 😺✂️✂️

I love wide legged trousers, so was very happy to see this recent release from Style Arc 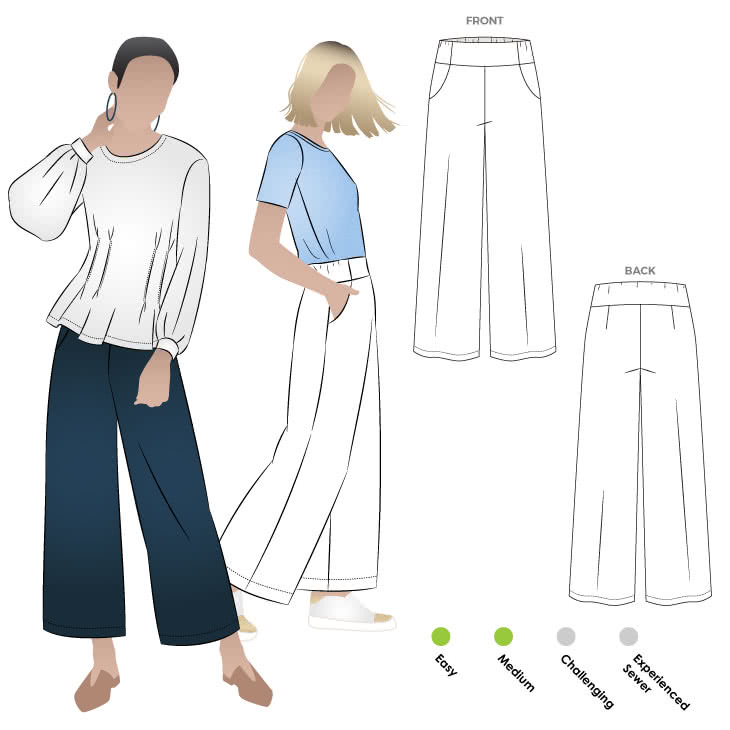 They describe the pattern as a ‘pull on pant sewing pattern with a smooth front yoke, elastic back and side pockets. ‘This new wide leg pants pattern gives you the option of 7/8th or full length. The Fifi Woven Pant is a simple pant to sew that will give you a sophisticated look’.

If you’re new to Style Arc patterns, you may find the instructions to be a bit brief, but the diagrams show you the seam order to aid construction and they use a lot of markings to line up seams. 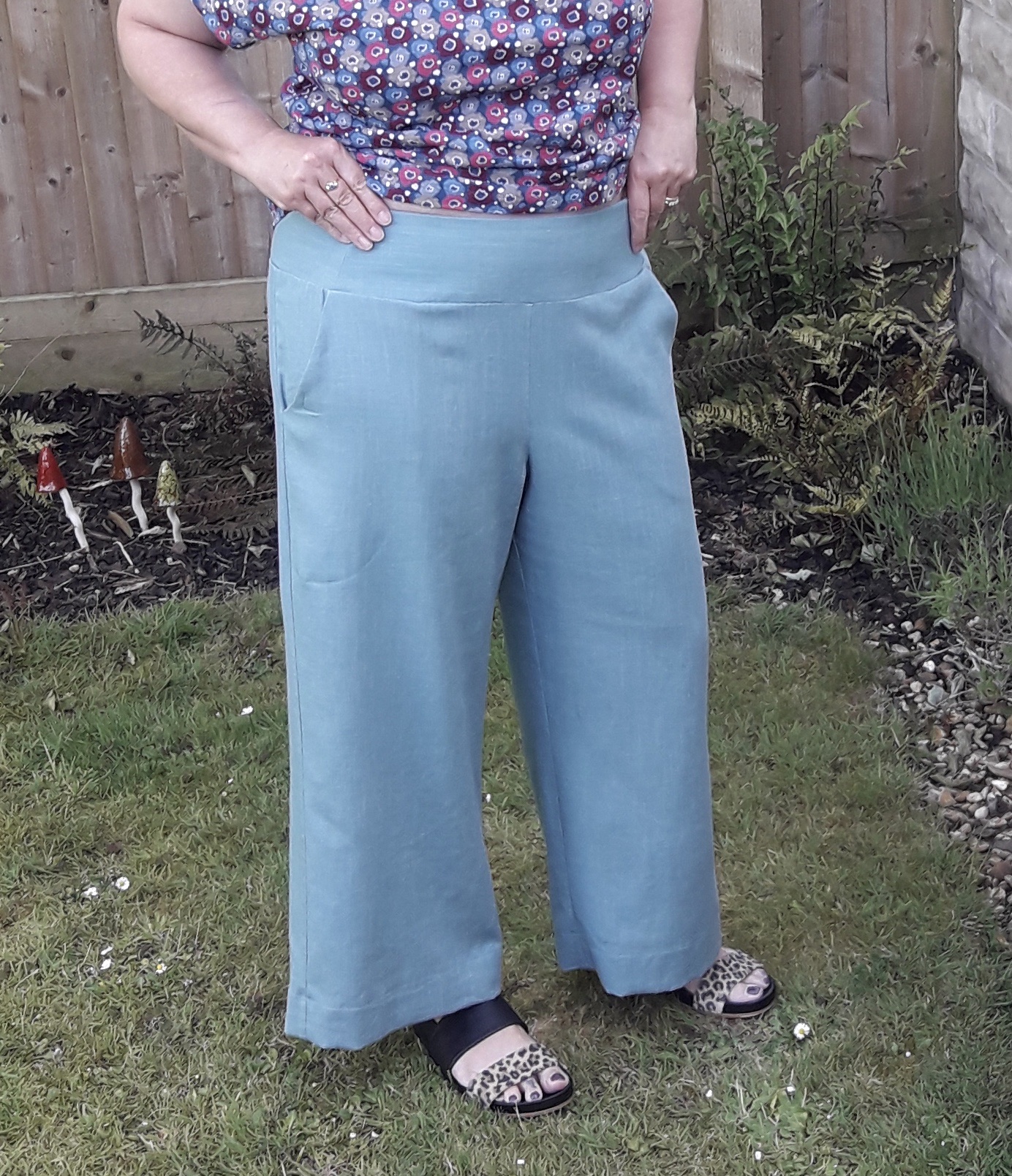 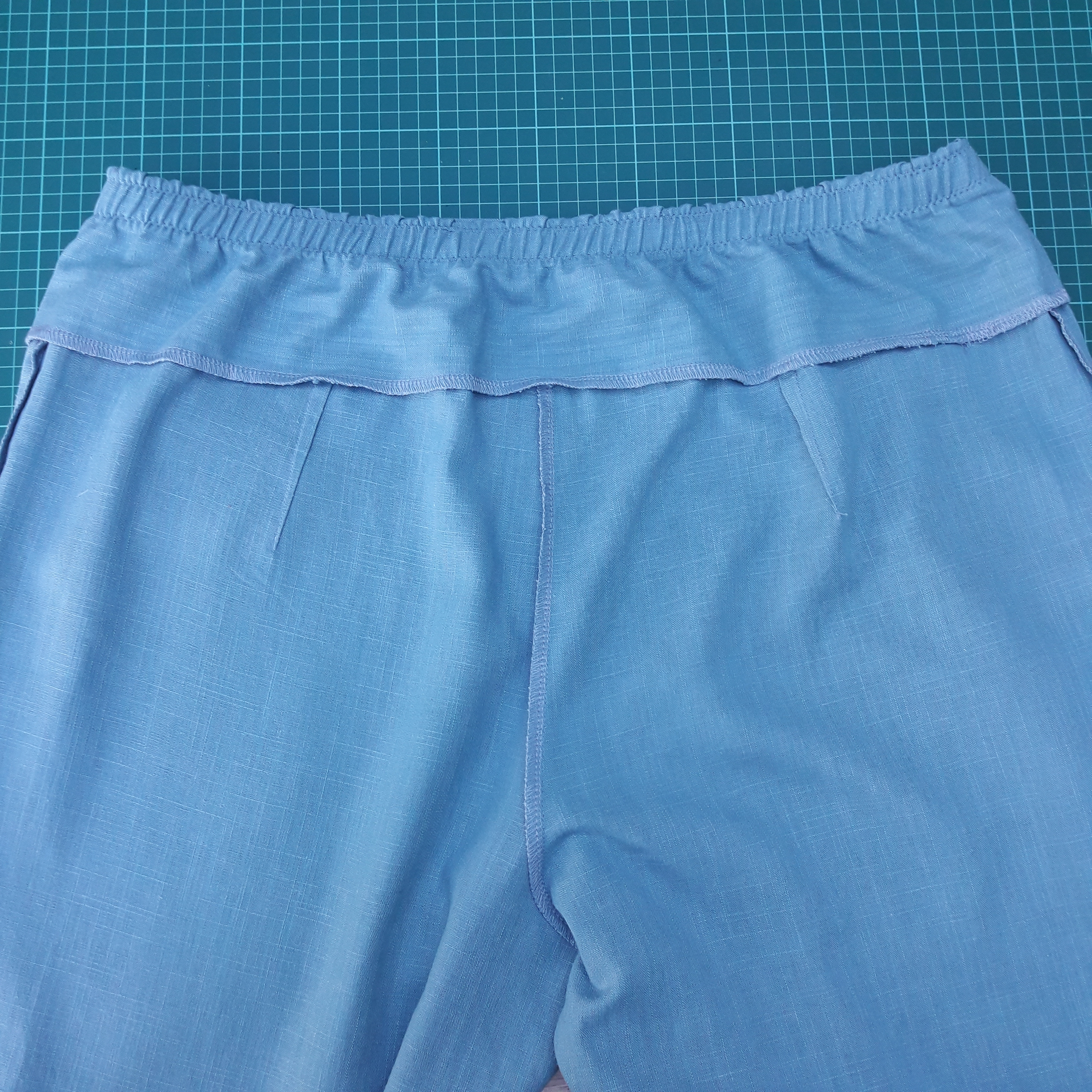 The back 1 inch wide elastic is sewn to the top of the back yoke, two darts add shaping so this section lies flat when worn

I cut the shorter length, at 5’4″ I turned a 2″ hem to get the 7/8th length. I even discovered a new attachment for my machine that gave a perfect straight hemline 😺 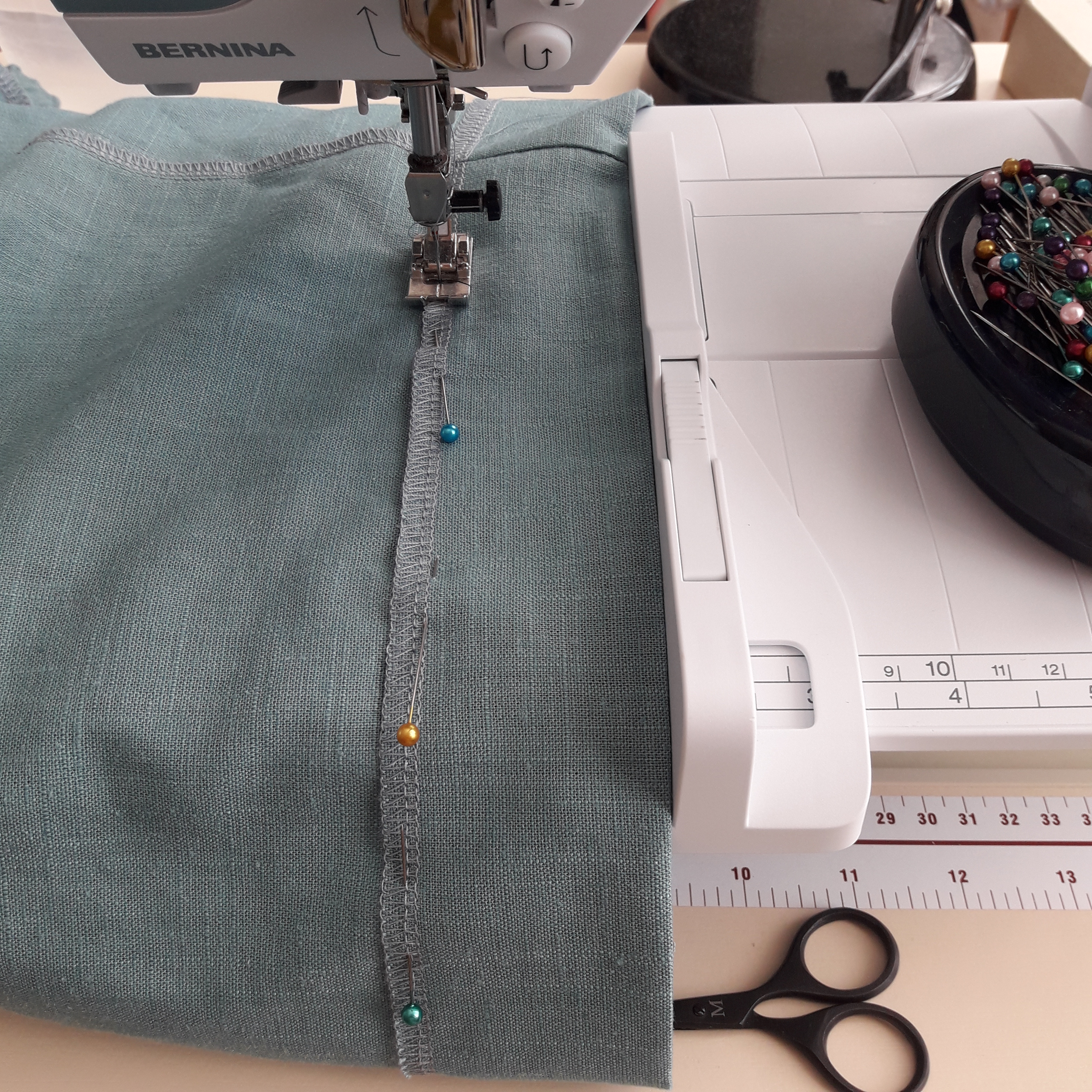 I did spend ages faffing with the elastic measurement, it isn’t on the pattern….it’s in the details on the website! 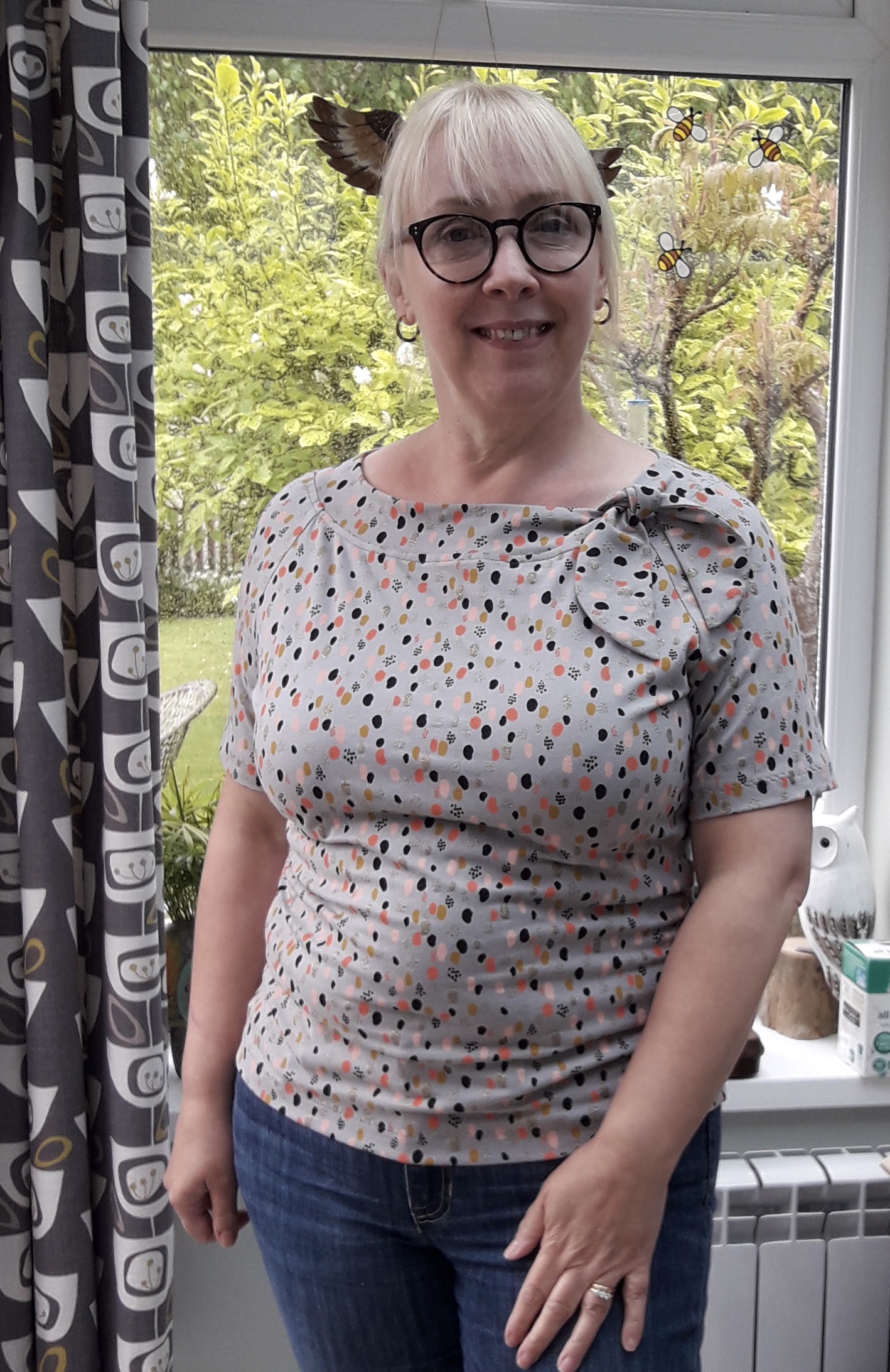 This pattern came out in March, and I bought this lovely sparkly jersey from Stitchy Bee to make it

There are three neckline variations and three sleeve lengths in this pattern. This is version 2 with the shorter tie and the short sleeve.

I”m not a huge fan of PDFs, but Sew Over It ones are super easy to put together and clearly marked. The instructions are clear, and there is a sew along on line if you want to see the pattern in progress. 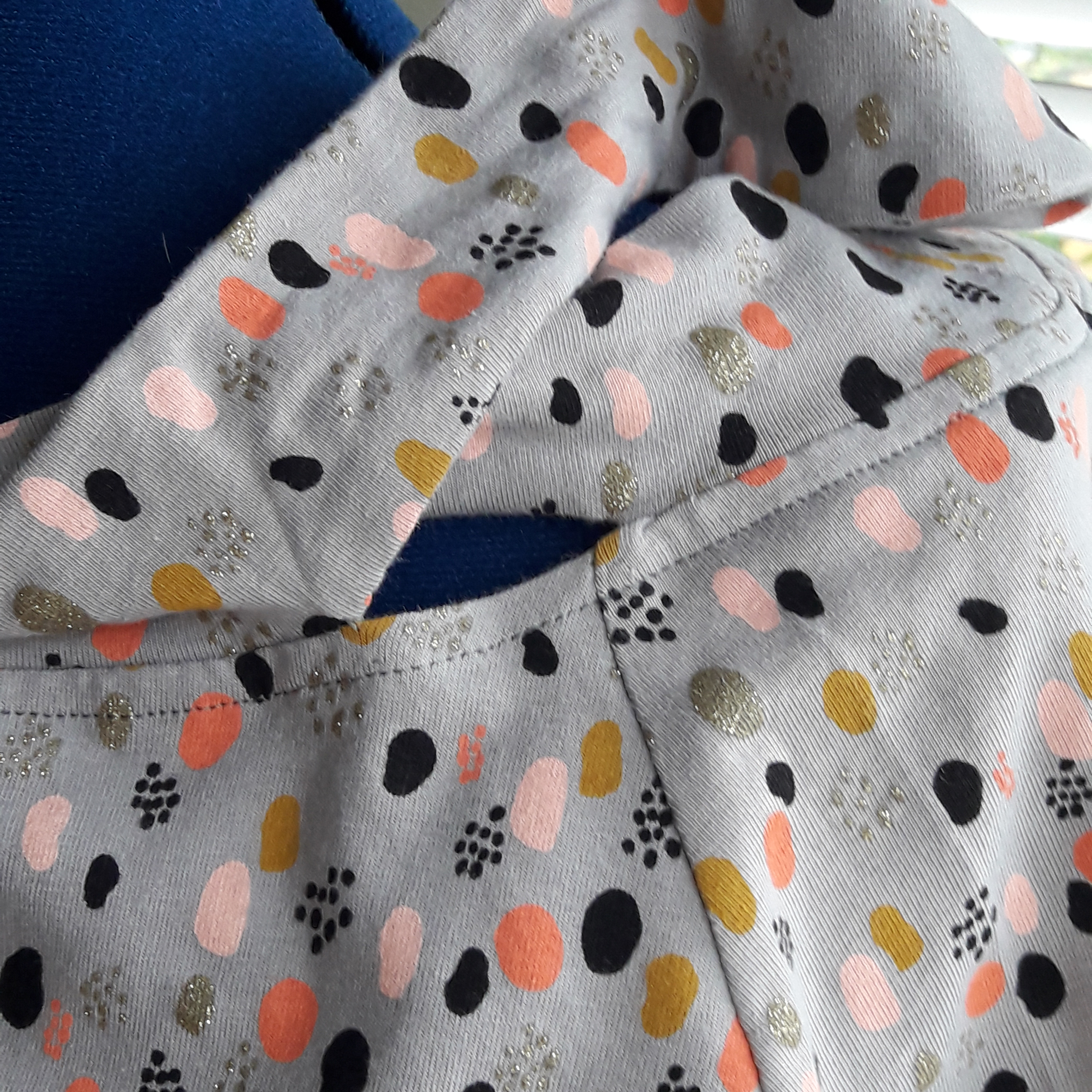 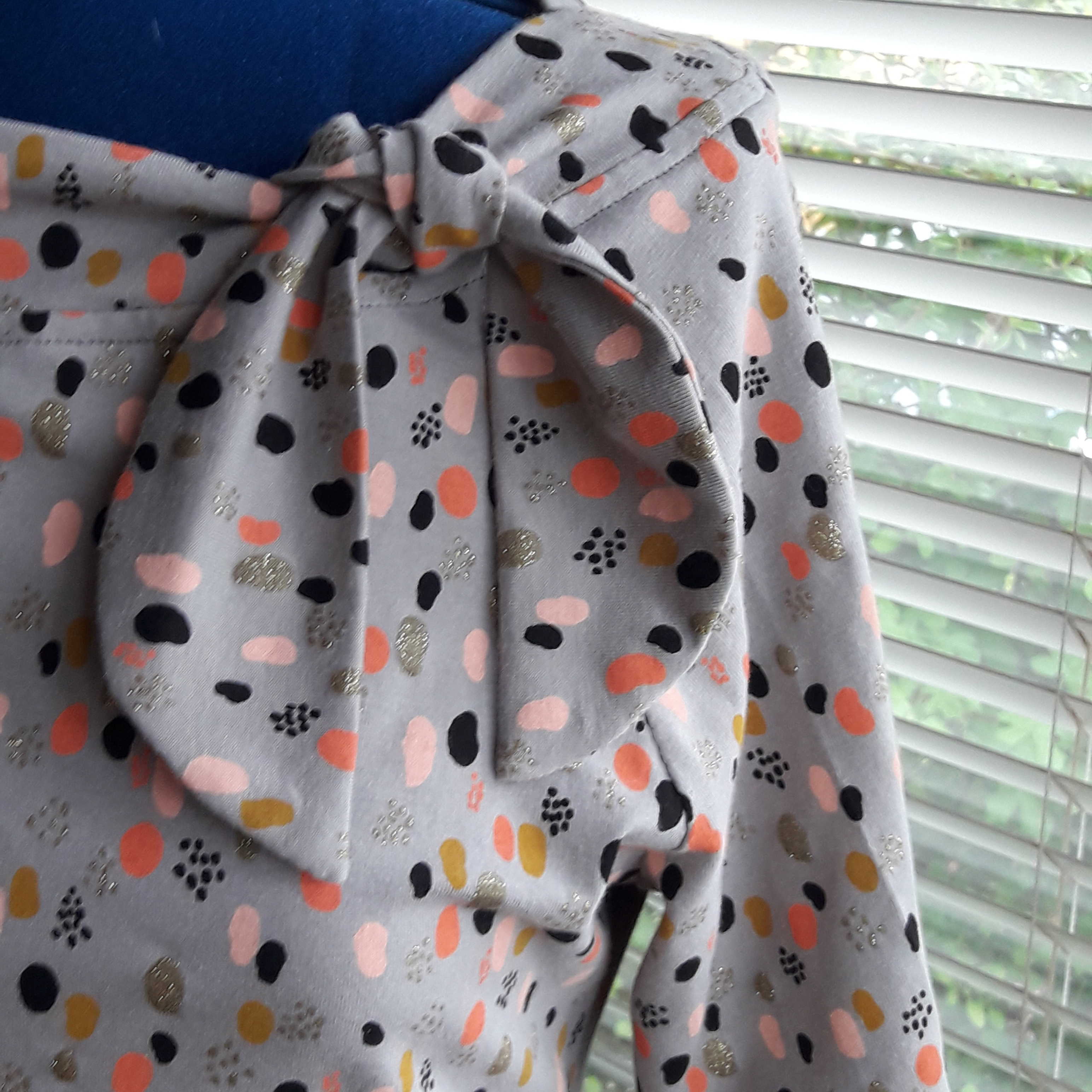 Love the tie detail, and the raglan sleeve makes this a quick make. Am sure I will revisit this pattern a few times 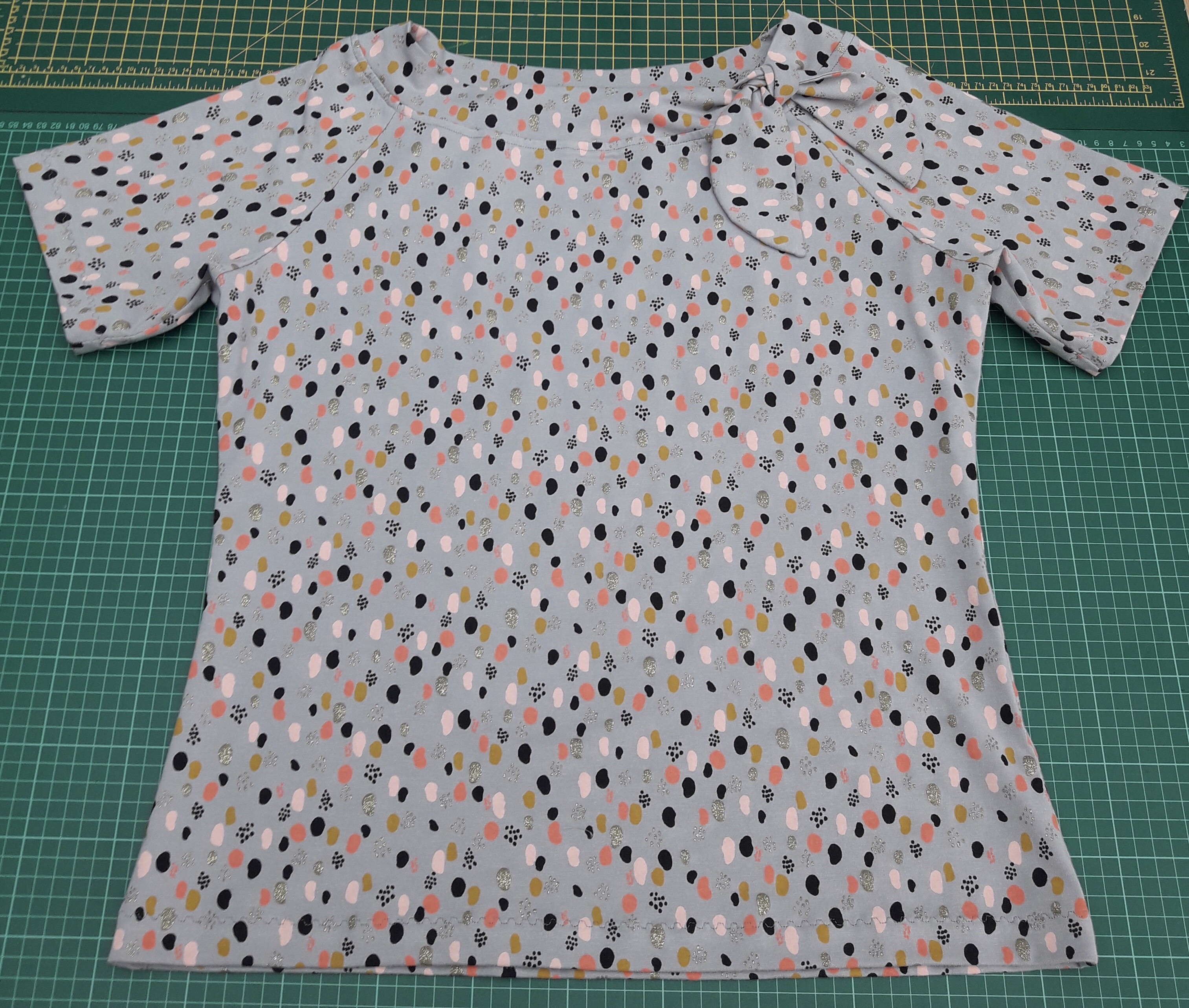 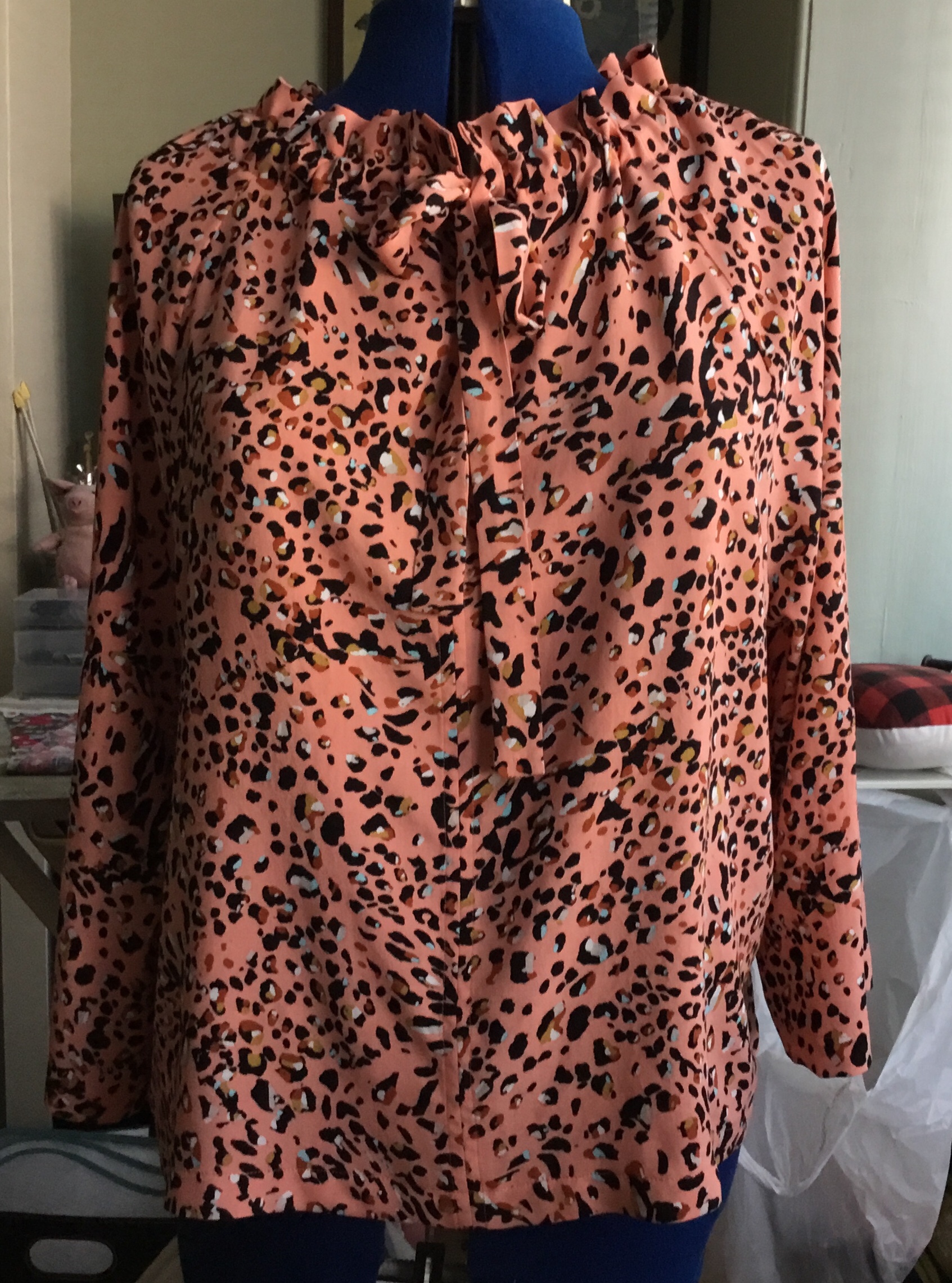 The Wilder has several options for a top and a dress.

The pattern has raglan sleeves, and ties at the neck. It’s an easy sew with great instructions. 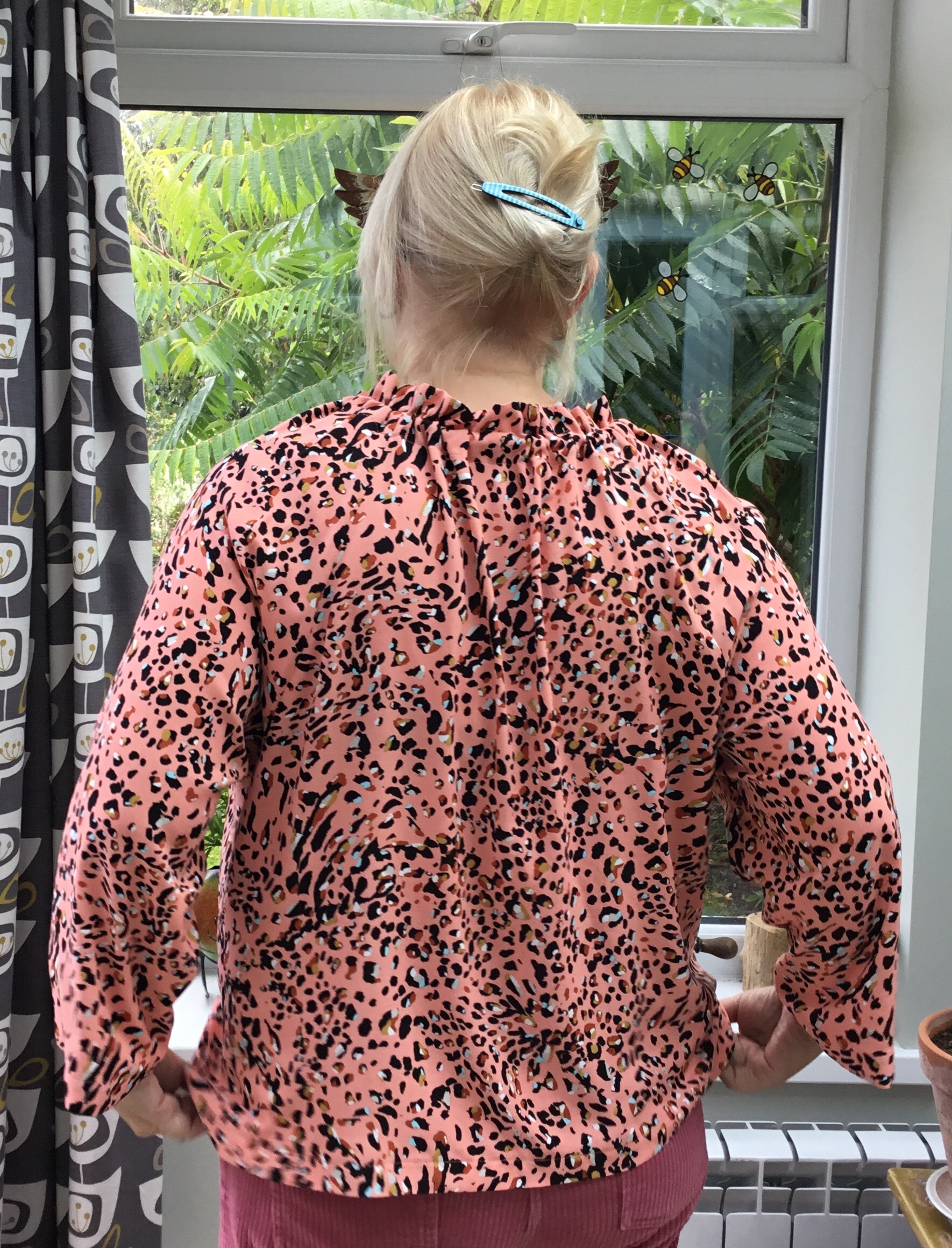 I discovered The Sewing Revival’s Patterns on Instagram, and picked this pattern as I loved the use of elastic at the front to create shape.

The Sewing Revival describe this top as ‘a flattering unique summer top with front gather feature and sloped rear hemline’. 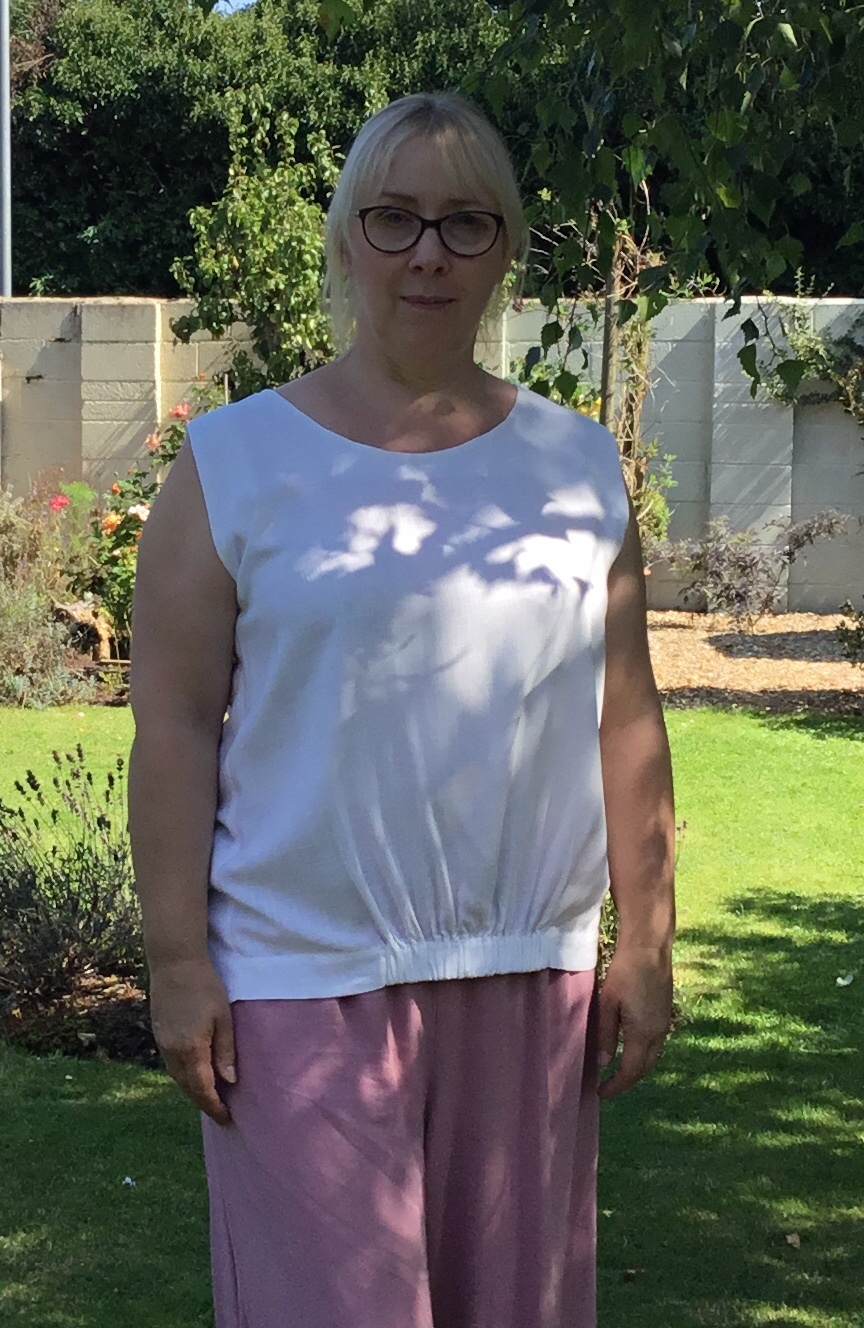 I made two, the first the V-neck in a cotton seersucker and the second in a very drapy viscose linen with the round neck. 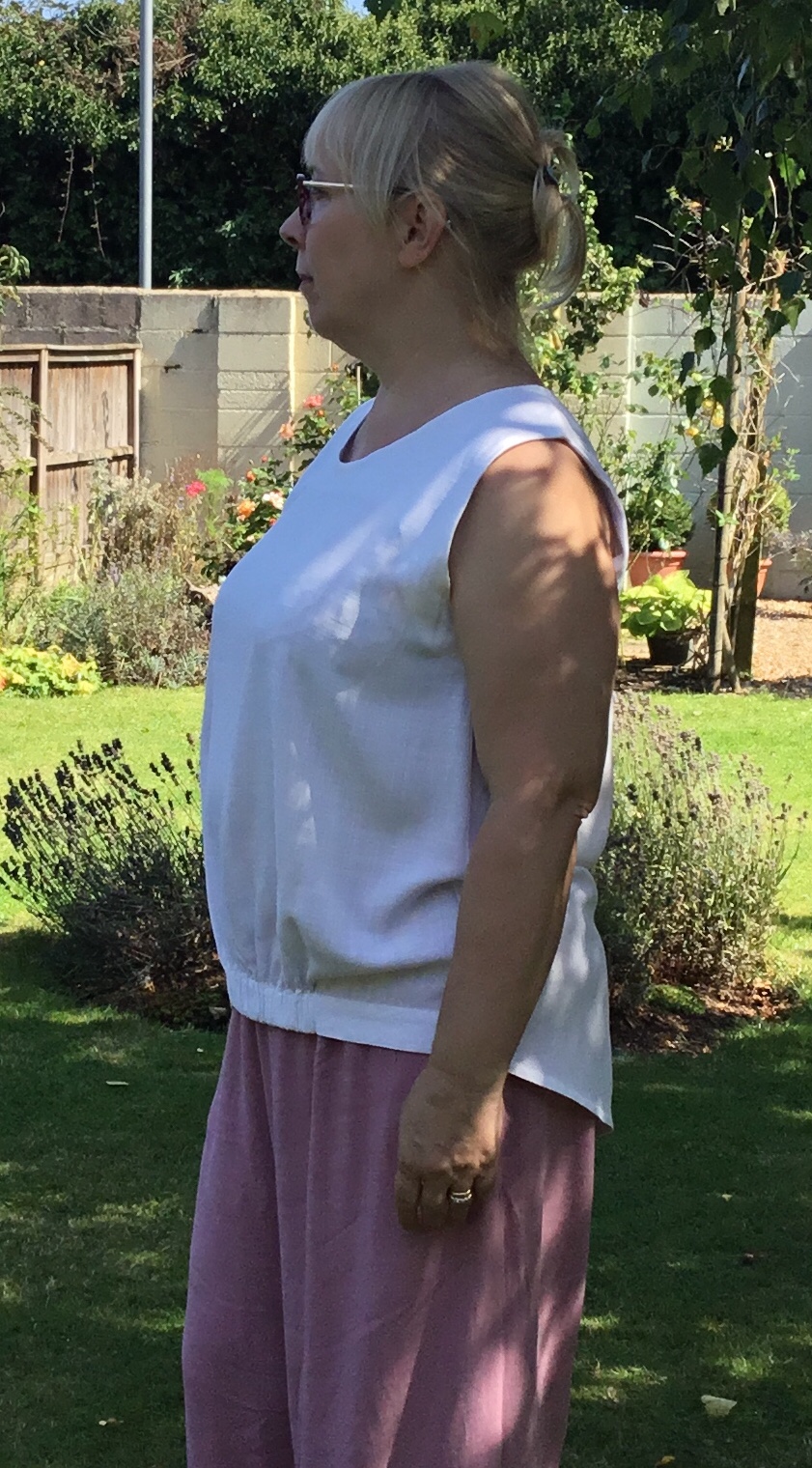 The sloped hem at the back is finished with bias binding. Both versions have a combined neck and sleeve facing

This top comes together quickly, the instructions are very well written, with lots of photos to guide a beginner 😺✂️✂️

This pattern is part of the new Rome Collection and has four variations. I made view A, omitting the cuffs and added 5cm to the length.

Cielo is described as ‘an easy, breezy take on a boxy tee and shift dress’

The instructions are super easy to follow, with clear line drawings for each step.

The back shoulder has inserts that add interest, and darts that sit above the bust. There are instructions for a neck facing or bias binding finish, with or without top stitching.

I chose the neck facing option with top stitching on the outer edge. The fabric is a polyester crepe that drapes really well. 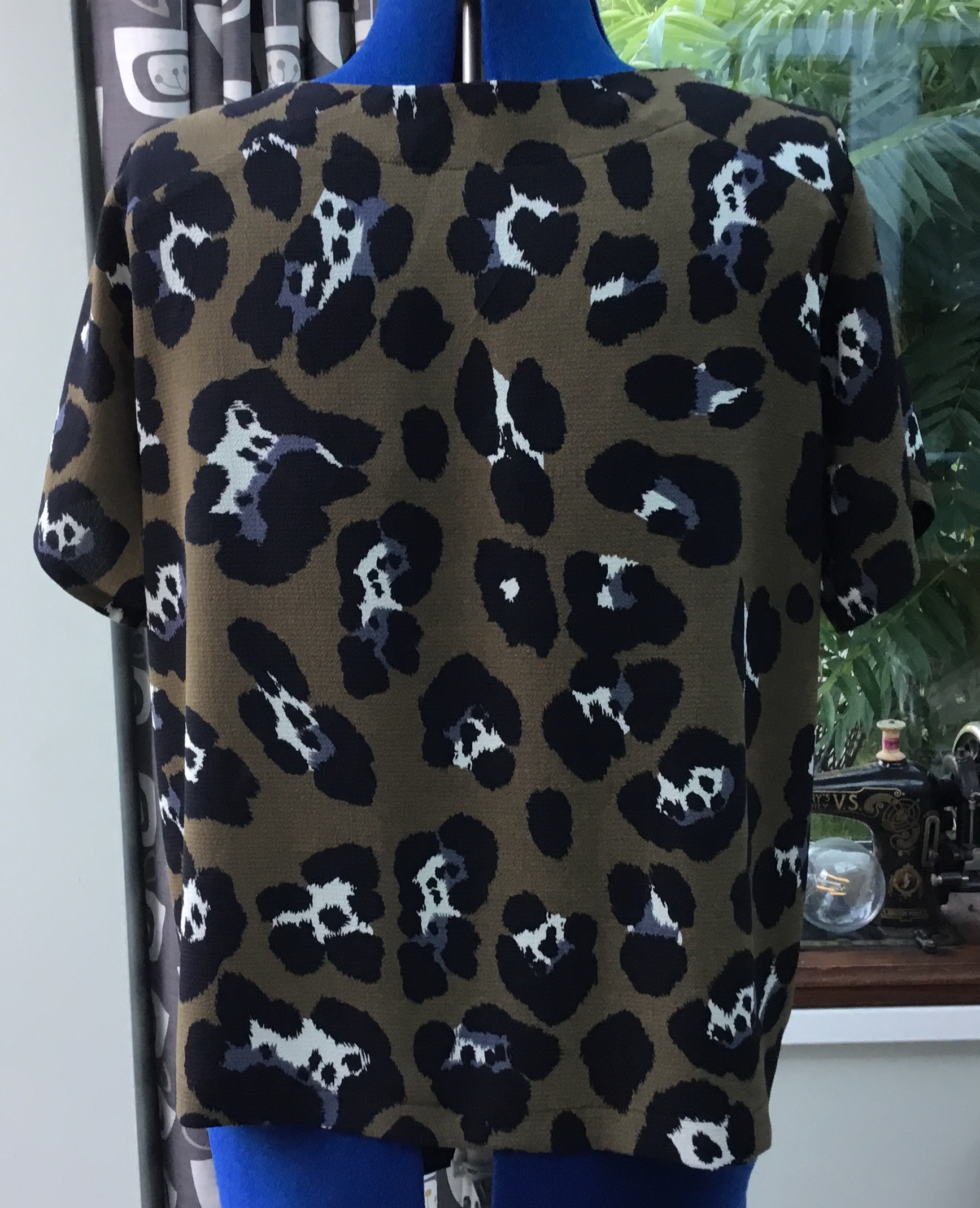 This pattern is a Simplicity collaboration with Sew House Seven and is a variation of their Mississippi Avenue Dress and Top Pattern. This pattern has two lengths and a sleeveless and cap sleeve version. These are view A 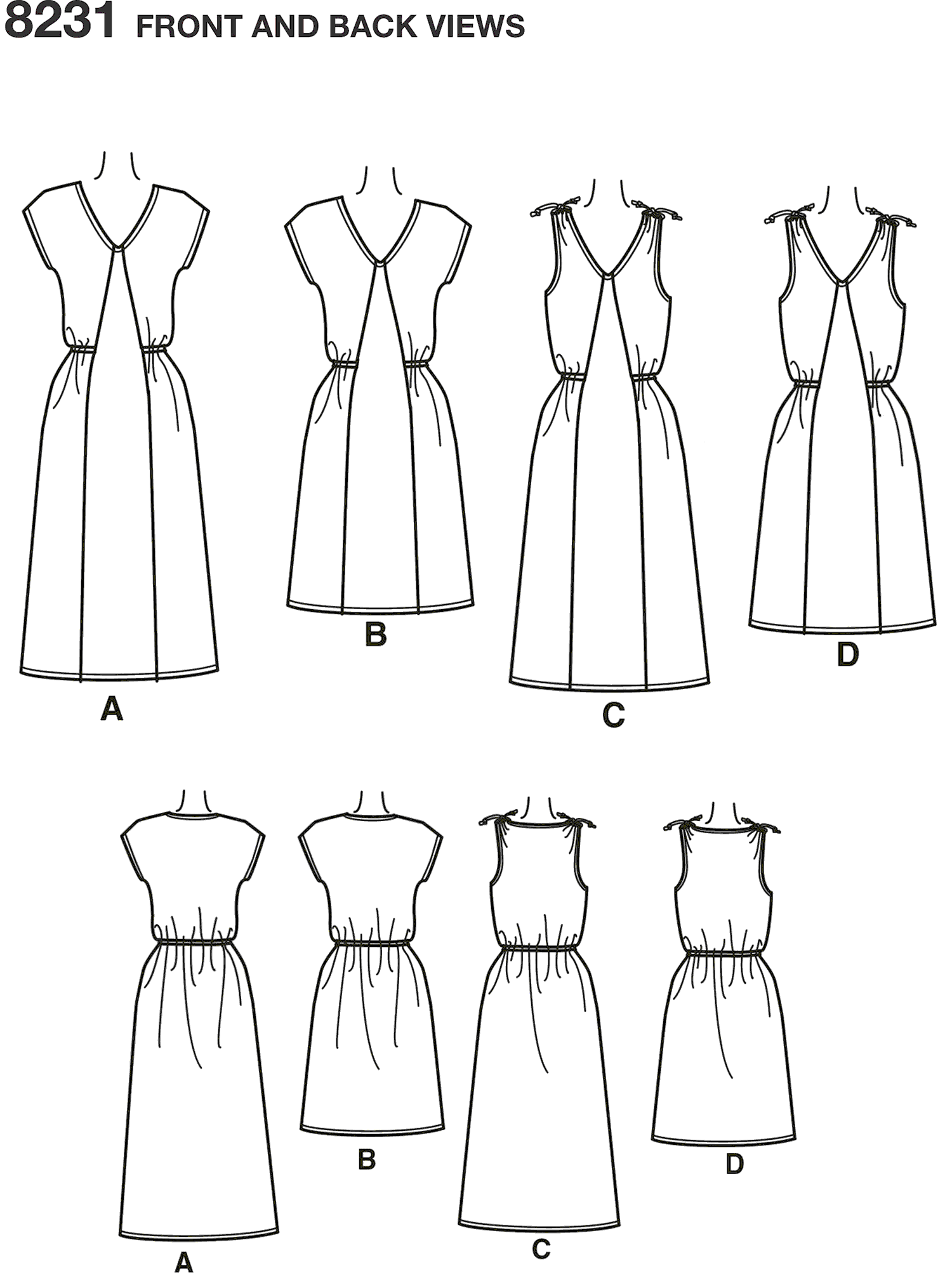 Simplicity’s description ‘misses elastic waist dress from Sew House Seven features v-neckline with option of over the knee or midi lengths and cap sleeves, or sleeveless with shoulder ties’. 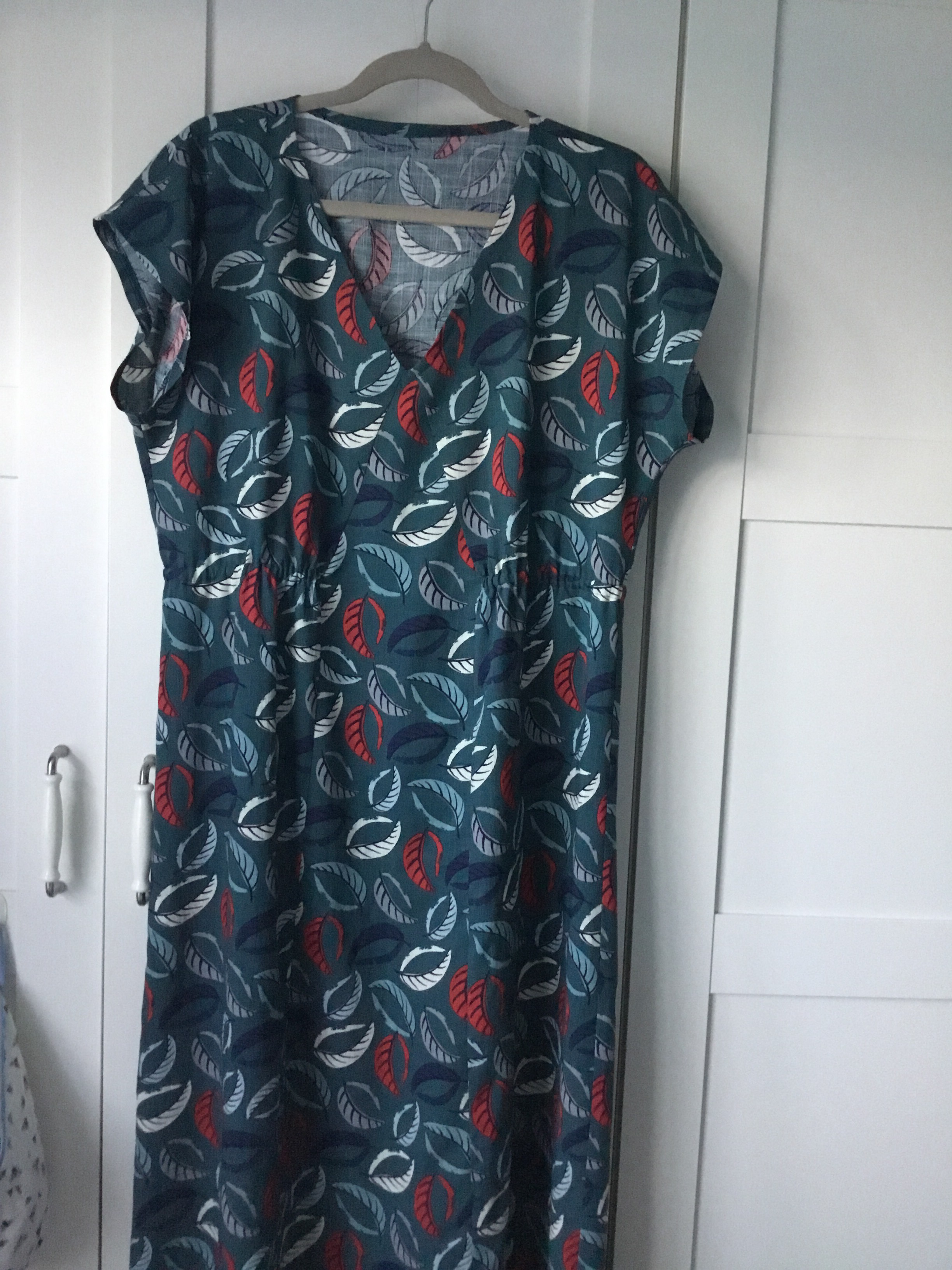 The dress had a centre panel that shapes to the v-neckline, best shown from the inside of the dress.

I stalled sewing in the front panel, there is a mark for the V of the neck binding which I initially thought was for the seam line 🙄 the red mark is below the ‘pyramid’ formed by the section joins in the picture below.

The fabrics are from Seasalt, bought in their summer sale 😺✂️✂️ 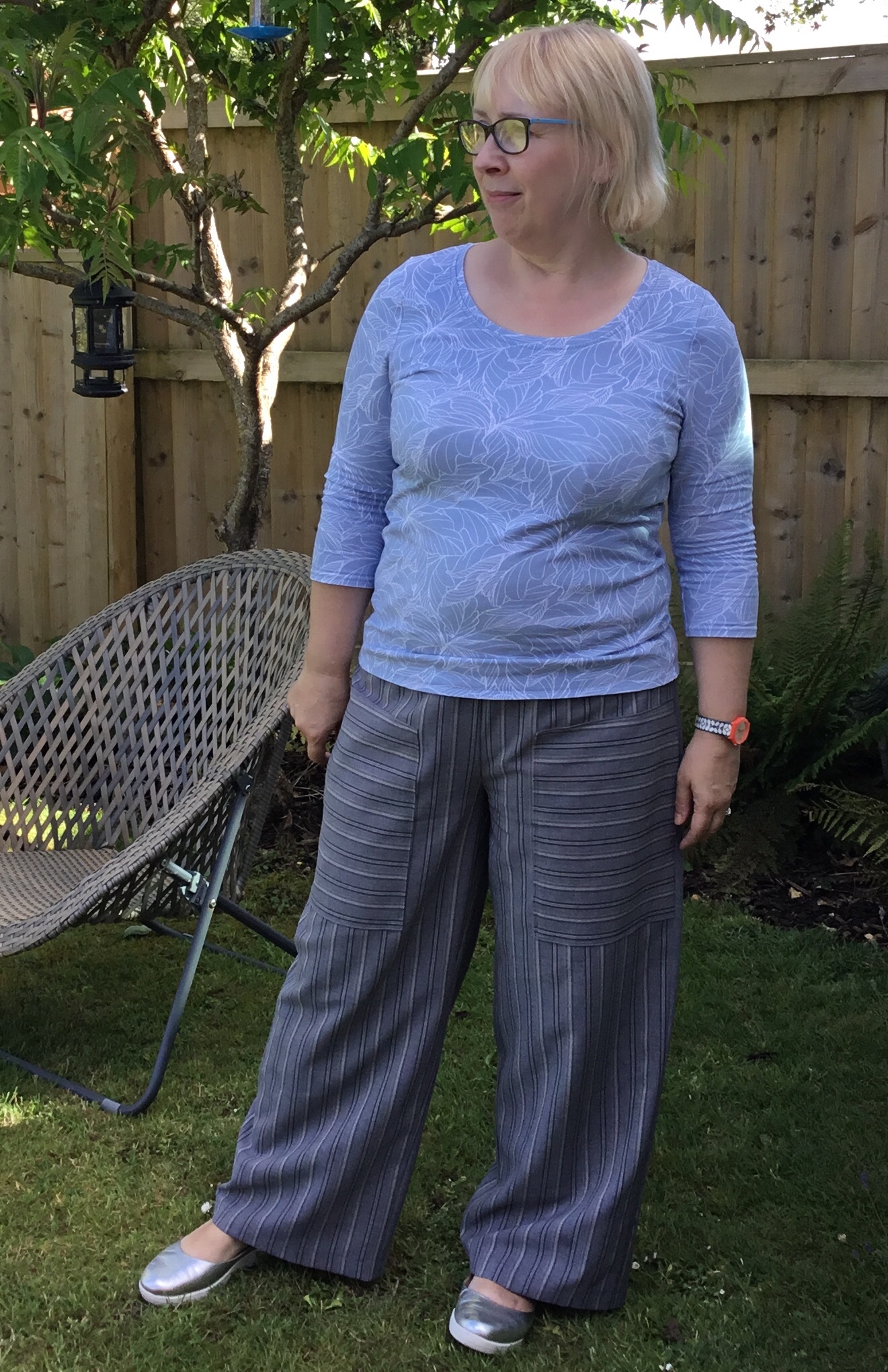 These trousers are a breeze to fit and are super comfy to wear. 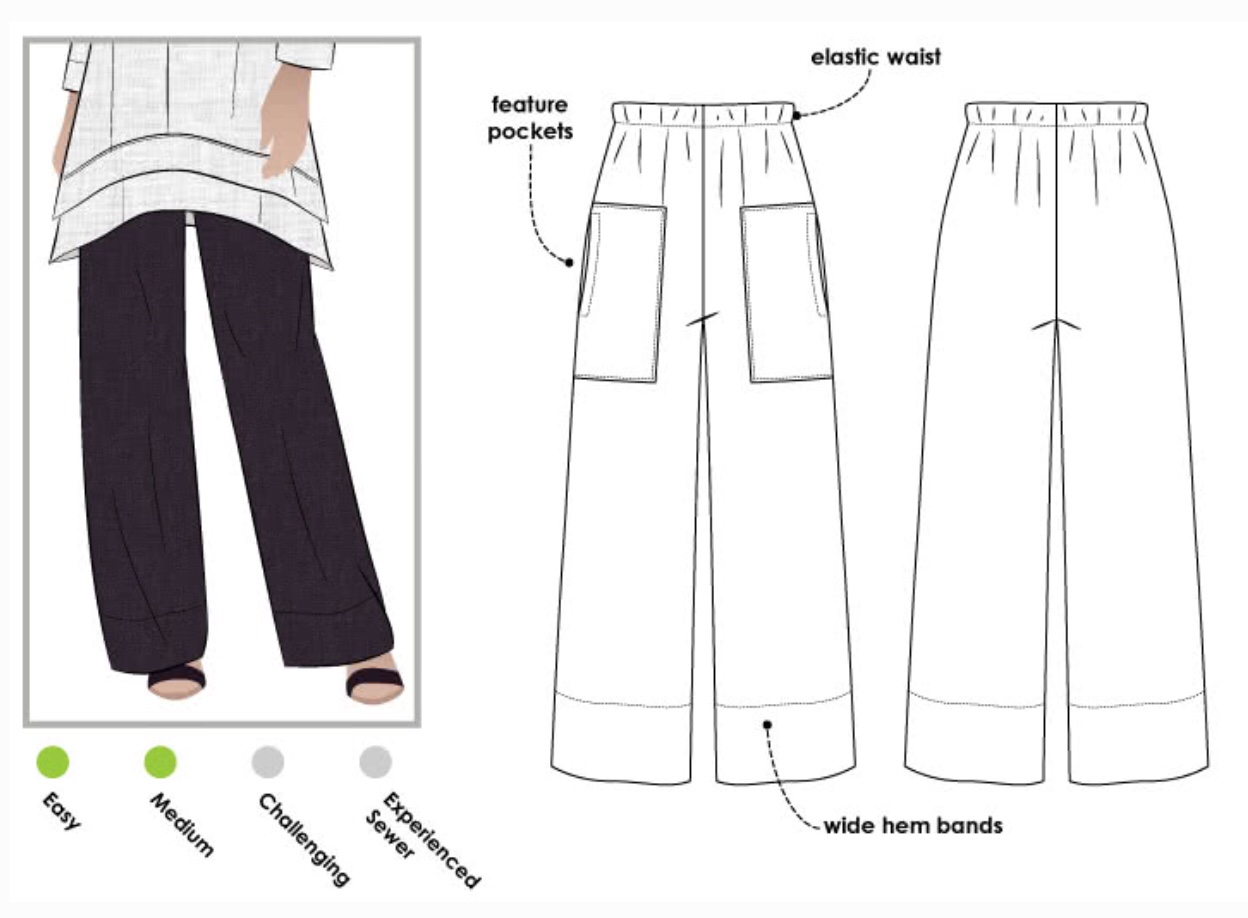 Style Arc’s description ‘this trendy wide leg pant is not only fashionable but very comfortable with it’s elastic waist, interesting patch pocket itch side opening and wide faced hem makes this pant a must have’.

The pockets open onto the side seam, and I added iron on interfacing to the openings.

To highlight the pockets I changed the stripe direction. The pockets are rather low, I raised them an inch after reading other reviews.

I omitted the hem facing as I already had the pocket contrast. The waist of the trouser folds over to case the elastic.

Just the right leg width, I made these straight from the pattern shortening the leg after trying on.